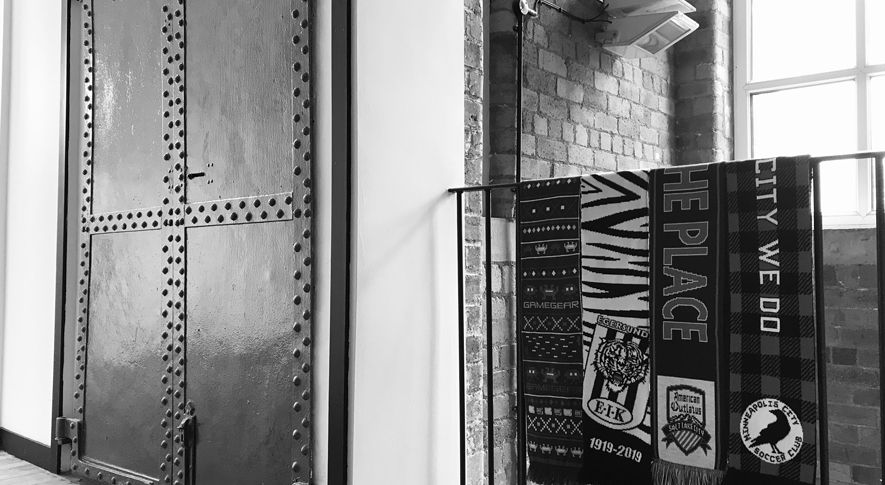 Global Scarves co-founder Alan Foster is a third generation textile producer. His family business was started in England back in the early 70s by his grandfather, Peter Foster.

Peter was one of the first people to produce matchday soccer scarves and music merch. He travelled around Europe selling from venue to venue from the back of his Ford Transit van. In those days scarves were woven blank and then screen printed.

In the early 80s he upgraded to jacquard knitting machines which cut down the labor process and moved into a larger factory based in Leeds, England, with over two million scarves produced at this factory. Alan joined the family knitting business aged 15 selling scarves on the streets at soccer games and market stalls in between school and college. Aged 25, Alan spotted a gap in the market in North America. Alan met co-founder Bill Kristian when Bill was actually a client of his grandfather’s factory.

Bill, a business graduate and soccer fan from Seattle, was also working within sales for a scarf company and became the perfect business partner for Alan’s vision of becoming the number one company for custom knitted scarves and beanies. Alan and Bill felt they could offer great quality products at competitive prices, with the focus of their business being on first class customer service. In 2012 Global Scarves was born! The business has grown over the years and now, due to the high sales volume, Global Scarves not only produces at its own factory in England, but also across Europe with over seven factories producing under the Global Scarves license. The company now offers a large range of products with sales offices across seven countries and ships to customers across the world. The HQ is based in Tacoma, Washington and the main production office is based in Leeds, UK.

The company has a diverse client base and has the pleasure of working with soccer teams, hockey teams, supporters groups, fundraisers, breweries and large corporates. It also works extensively with artists and their agencies within the music industry.

Getting a quote is quick and easy...

Founded in 1973, Global Scarves is now the third generation of what started out as a family business and has now become a global company selling personalized merchandise around the world. Feel free to get a quick and easy quote today.

Join our newsletter for offers and updates