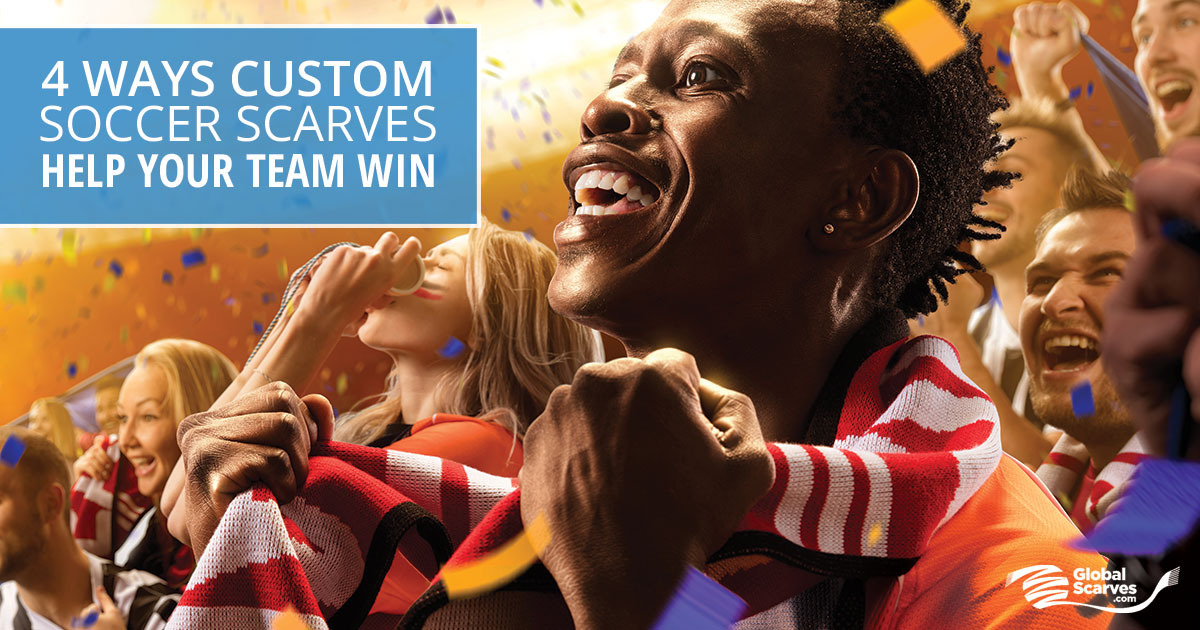 We’re all aware that soccer games are decided by the players on the field. But as fans, do we have an affect on the outcome of the game? Fans feel they can actually impact their team and help them to victory in small ways. We also think that you can help influence the game in a positive direction, and we’ll show you how to do so with your soccer team scarves.

The first way you can help your team win is by wearing your team’s custom soccer scarves around town in preparation for the next game. By wearing your scarf, it adds to the collective mass of people sporting your team’s paraphernalia, it can even influence more fans to throw on their scarves. Think about how that can affect your team’s players. As they’re going about around town, they see lots of citizens wearing their logos and colors on their scarves, showing their support for the upcoming game. It acts as a reminder that the people of their city are counting on them to play their absolute best. When it comes time to practice, you bet they’re going to be practicing a little harder in anticipation for the upcoming game. Think about it this way, if you had a performance coming up, perhaps a sports or musical showcase, and you knew that there would be thousands of people watching you extremely intensely, you’d practice with just a bit (or a lot) more enthusiasm then, wouldn’t you? It’s no difference for your team’s players. Wearing your scarf around town acts as a reminder and anticipation builder for them.

Excitement can be powerful in soccer games. By wearing your scarf around town, you’re building the excitement for yourself and your fellow fans for the upcoming match. The scarves serve as reminders that you’re team will be going to battle soon, and that you’ll be there to watch. Building this excitement is like seeing a few seductive movie trailers before a highly anticipated film. The movie is more fun and exciting to attend when there’s a build up of emotion; the same thing goes for a soccer match. The excitement intensifies throughout the week until game time when the fans explode into an audible frenzy of cheers, chants, and war cries in the stands. This auditory madness creates an immensely powerful experience for the players, pushing them just a little harder and perhaps influencing their performance.

Soccer may have more of a home field advantage than any other sport. The reason being is the powerful energy the fans create in the stadium when the home team gets the ball. When fans feel united, they’re more compelled to cheer with their neighbors, rather than as individuals. Fans who are wearing team scarves together have a sense of comradery with their fellow supporters. This difference might be a small, but with enough fans cheering a little louder, this can make a huge impact for those on the field. There can be a ripple effect created by a fan base wearing scarves together, cheering just a bit louder, feeding off each other’s energy and delivering that momentum to the players on the field.

Beliefs can be powerful. Wearing a uniform that looks and feels good gives players an extra sense of confidence and positively affects their gameplay. This consequence can be said for the fans as well. If fans look and feel better, dressed in their favorite team’s custom soccer scarf, it affects their beliefs as fans. People who believe their team is going to win the game are more likely to cheer that much harder and with more enthusiasm. This powerful energy affects the other fans in proximity, and like we’ve mentioned before, even transfers to the players on the field.

If you’re ready to start helping your team win games, Global Scarves is here to gear you up for battle. Whether you’re looking to outfit your whole town or just provide a few custom scarves for your friends, we can create any volume of scarves for your needs. We use the highest quality printed or knit scarves, custom made for your personal preferences. Contact us today to inquire about our custom soccer scarves for the season.

Getting a quote is quick and easy...

Founded in 1973, Global Scarves is now the third generation of what started out as a family business and has now become a global company selling personalized merchandise around the world. Feel free to get a quick and easy quote today.

Join our newsletter for offers and updates